They say it’s never too late to change. I am a normal, regular man trying to cope with work, family and life in general. When I was young I was really fit, I played rugby and 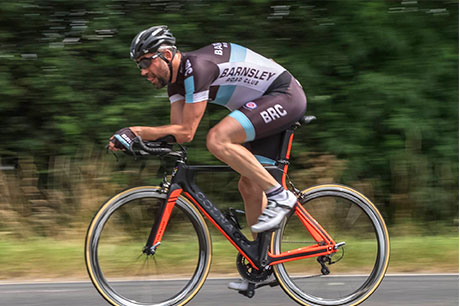 cycled. As I matured, life caught up and so did the weight. You wouldn’t say I was fat but I was carrying 12 kg (24lb) of extra weight. Before I knew it, I was 46 years old and sliding very quickly into a middle age slump.

I have always tried to keep myself fit by cycling and tried to follow a reasonably healthy diet. Like a lot of people my life is pretty demanding. I work full time in a stressful job which I enjoy, but I commute three hours a day and have two teenage children, so that puts a dent in extra curricular activity.

One day I decided enough is enough and I am going to reclaim my health and fitness, so I contacted Nigel Mitchell, a dietitian who put a diet and training plan together for me.

The thing I liked about having a plan was that all I had to do was follow it and the results would come. This included eight hours a week of structured exercise, which may seem a lot but when it was broken down over the week it was really manageable. To begin with, I was worried that I would not have enough energy, but the plan was designed to ensure that my energy levels were topped up. He included in the day a 40g portion of pistachio nuts to snack on between meals and informed me that they would be ideal because they would slowly release carbohydrate healthy fats, protein and antioxidant. I never felt deprived.

Initially, I could not believe how good I felt and Nigel’s plan was even helping me to cope with the stresses of work. I am now 5 months into the plan I have lost over 13kg, but more importantly, it feels like my fitness and energy levels are through the roof. I will never go back to that lethargic low energy feeling.